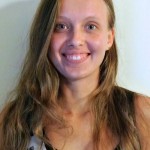 The literature suggests that bilingual language processing takes place in similar brain regions for both of the individual’s languages. However, more recent developments in the field of neuroimaging have suggested that a bilingual’s languages may be separated to some degree on micro-anatomical level.