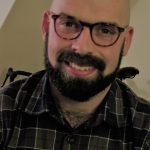 My research addresses the technopolitics of nuclear weapons and infrastructure in South Africa, during and after apartheid, the implications of nuclear technology for domestic South African politics, and the impact that South Africa’s disarmament and non-proliferation practice has international nuclear order at large. Via an interdisciplinary research philosophy, I propose a dialogical relationship between assumed ‘global’ and ‘local’ levels of political activity in nuclear politics, aiming to transcend the scholarly divide between accounts of ‘international’ nuclear politics on one hand, and ‘the social life of the bomb’ on the other.